The Medicare Modernization Act (MMA) requires the Centers for Medicare & Medicaid Services (CMS) to announce each year the Medicare Part D standard defined benefit and Retiree Drug Subsidy (RDS) amounts for the coming year. On April 7, 2014, the CMS announced the rates for 2015.1 In 2015, the deductible and out-of-pocket limit for the defined standard Part D plan will be higher than the 2014 amounts.

This Capital Checkup features charts comparing the 2015 numbers to the 2014 numbers. It also reviews changes to the Part D benefit, which were made by the Affordable Care Act,2 and illustrates the impact of those changes on the 2015 benefit. Coverage for Medicare beneficiaries in the Part D prescription drug coverage gap, or “donut hole,” will continue to increase in 2015.

For 2015, plan sponsors eligible for the RDS will receive 28 percent of Part D prescription drug expenses between $320 and $6,660.3 The table below compares those numbers to the numbers for 2014.

The table below compares the standard benefit design parameters for a Part D plan for 2015 to the amounts for 2014. 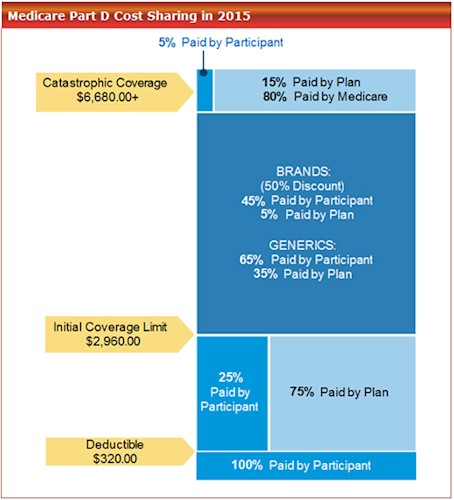 In 2015, manufacturers will continue to cover 50 percent of the cost of the brand-name drugs and the plan will pay another 5 percent, providing seniors with total coverage of 55 percent in the donut hole. Therefore, seniors will pay 45 percent of the costs for brand-name drugs in the donut hole. The adjacent chart shows 2015 cost sharing for individuals in a standard Medicare Part D prescription drug plan (PDP) starting with the deductible at the bottom of the chart and ending with catastrophic coverage at the top of the chart.

Coverage of generic drugs in the gap will increase annually until it reaches 75 percent in 2020. By then, cost sharing for both brand and generic prescription drugs will be the same during the “donut hole” as during the initial coverage period. Consequently, in 2020, individuals will pay 25 percent of drug costs, and the Part D plan will pay 75 percent. In 2015, Part D plans will pay 35 percent of the cost of generic drugs in the donut hole leaving seniors responsible for 65 percent.

Plan sponsors should note the new benefit amounts for planning purposes for 2015 — both with respect to expected RDS income and to the design of any Medicare Part D prescription drug plan that is offered to retirees.

Prior to making benefits designs for 2015 final, plan sponsors may wish to analyze the benefits of contracting with a Medicare PDP as opposed to retaining the RDS. In many instances, contracting with a PDP will produce a greater cost savings than the RDS because the reimbursement that insurers get from CMS can be greater than what plan sponsors obtain in direct subsidies. Plan sponsors can review potential savings for a PDP, and also review potentially new compliance obligations, and determine whether the PDP is an appropriate option for the plan retirees. Also, the RDS can no longer be deducted for tax purposes, another incentive for certain organizations to consider contracting with a PDP or exploring other options.

Plan sponsors that continue to apply for the RDS should take several actions to make sure that RDS income continues and that they are prepared for potential audits by the HHS Office of Inspector General:

As with all issues involving the interpretation or application of laws, health plan sponsors should rely on their legal counsel for authoritative advice on the integration of Medicare with their employee benefit plans. Sibson Consulting can be retained to work with plan sponsors and their attorneys on issues related to Medicare Part D.

1 The announcement (see Part D Benefit Parameters on page 58) and press release are available on the CMS website. (Return to the Capital Checkup.)

3 As a reminder, since 2013, the Affordable Care Act prohibits employers from taking a tax deduction for costs for retiree drug claims that were reimbursed under the RDS program. (Return to the Capital Checkup.)