This Update features charts comparing the 2019 numbers to the 2018 numbers. It also reviews changes to the Part D benefit, which were made by the Affordable Care Act and the more recent Bipartisan Budget Act of 2018, and illustrates the impact of those changes on the 2019 benefit.

The table below compares the standard benefit design parameters for a Part D plan for 2019 to the amounts for 2018.

* In the catastrophic portion of the benefit, beneficiaries pay the greater of 5 percent coinsurance or fixed copayments set by CMS, which are shown in the last two rows of this table.

** Multi-source drugs are drugs that may be purchased from multiple manufacturers or distributors.

The Bipartisan Budget Act of 2018 (the Act) increases the amount that manufacturers of brand-name drugs must pay during 2019 and beyond when Medicare beneficiaries are in the coverage gap (the period during which there is no Part D coverage until the out-of-pocket threshold is reached). Currently, manufacturers of brand-name drugs pay 50 percent of costs during the coverage gap. The Act increases that share to 70 percent starting in 2019.2

The chart below shows 2019 cost sharing for individuals in a standard Medicare Part D prescription drug plan, starting with the deductible at the bottom of the chart and ending with catastrophic coverage at the top of the chart. 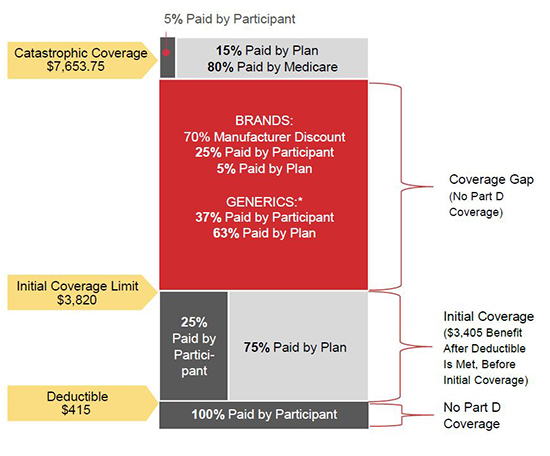 * This breakdown is not affected by the Bipartisan Budget Act of 2018.

The Act increases Medicare Part D (and Part B) income-based premiums for individuals with adjusted gross income of at least $500,000 (or $750,000 for married couples filing jointly) starting in 2019. Before the Act, individuals at these income levels were treated the same as individuals with incomes of at least $160,000 (or $320,000 for couples). The Act will create a new income-based band. Individuals in this new income band (at least $500,000 for individuals or $750,000 for couples) will have to pay higher premiums. The base Medicare Part D premium for 2019 will be announced by August.

The Affordable Care Act made significant changes to the Medicare program, including for Medicare beneficiaries enrolled in a Part D prescription drug plan. Based on these changes, coverage of brand and generic drugs in the coverage gap has been increasing annually, with seniors paying less out of pocket each year until the coverage gap is eliminated. The Affordable Care Act eliminated the coverage gap for brand and generic drugs in 2020. The Bipartisan Budget Act of 2018 eliminated it for brand-name drugs in 2019, by reducing the percentage individuals will pay in 2019 for brand-name drugs to 25 percent, as shown in the following table.

* The Bipartisan Budget Act of 2018 did not change these percentages for generic drugs.

* The cost threshold is the minimum amount of covered Part D drug expenses that must be incurred by an individual before a plan sponsor is eligible to receive the RDS based on the individual’s claims.

** The cost limit is the maximum amount of covered Part D drug expenses for which a plan sponsor may claim the RDS for each individual.

Plan sponsors should note the 2019 amounts for planning purposes — both with respect to expected RDS income and to the design of any Medicare Part D prescription drug plan that is offered to retirees. Before deciding on benefit designs for 2019, plan sponsors may wish to analyze the benefits of contracting with an Employer Group Waiver Plan (EGWP)3as opposed to retaining the RDS. In some instances, contracting with an EGWP will produce greater cost savings than the RDS because the reimbursement those insurers receive from CMS can be greater than what plan sponsors obtain in RDS subsidies. However, the expansion of coverage for participants may increase future costs for plans. Plan sponsors that already have an EGWP prescription drug plan should review the plan annually to assure that its terms remain advantageous.

Plan sponsors that continue to apply for the RDS should take several actions to make sure RDS income continues and that they are prepared for potential audits by the Department of Health and Human Services Office of Inspector General:

How Sibson Can Help

Sibson works with trustees and their fund counsel to address issues related to Medicare Part D, including quantifying the savings associated with introducing an insured or self-insured EGWP over the amount received from the RDS. If you decide to apply for the RDS, reach out to us for assistance with all of the recommended steps outlined above.

In addition, we help plan sponsors select Medicare Advantage plans that offer the best fit based on their current and future objectives. With our guidance, you can make informed decisions about which vendors offer the best value and the most competitive premium rates or self-funded financial terms. If you are interested in measuring retiree access to providers and assessing which programs and vendors offer superior clinical and member services geared towards a retiree population, let us know.

For more information about how the 2019 Medicare changes may affect your plan, please contact your Sibson consultant or the Sibson office nearest you.

1 An announcement known as a Call Letter is available on the CMS website.

2 For a summary of the benefits provisions in the Act, see Sibson Consulting’s April 19, 2018 Update.

3 As the name suggests, EGWPs are custom plans set up for the exclusive use of the group of participants and for which CMS has waived some Medicare requirements.

Update is Sibson Consulting’s electronic newsletter summarizing compliance news. Update is for informational purposes only and should not be construed as legal advice. It is not intended to provide guidance on current laws or pending legislation. On all issues involving the interpretation or application of laws and regulations, plan sponsors should rely on their attorneys for legal advice.

Sibson Consulting is a member of The Segal Group.

To receive Update and other Sibson publications, join our email list.

Copyright © 2018 by The Segal Group, Inc. All rights reserved.