A mid-size private company whose sales force contained some of the organization’s most strategic roles identified its top sales employees as part of the “Winner’s Circle.” The client rewarded the Winner’s Circle with a trip to a beach resort and other financial incentives. However, when HR looked into the top performers’ 401(k) contribution rate, they found it was low. The client’s DC program included an employer match of 100% for the first 3% of employees’ contributions, then a 50% employer match for the next 2% of employees’ contributions.

In conjunction with Sibson Consulting, the client’s HR department prepared a compensation tally sheet for each employee in the Winner’s Circle. It analyzed the three-year history of cash received from base salary, commissions, other incentives and the 401(k) match (i.e., the employer 401(k) contribution). The results of this analysis, summarized below for the three-year period studied, proved that the average deferral rate for this group of employees was lower than the average deferral rate for other employee groups. The results also indicated that the client’s rewards for the sales force focused primarily on commission and other incentives. While these typically are the most common compensation components for a sales organization, the client was missing an opportunity to further differentiate the total compensation package for its most strategic group of employees. 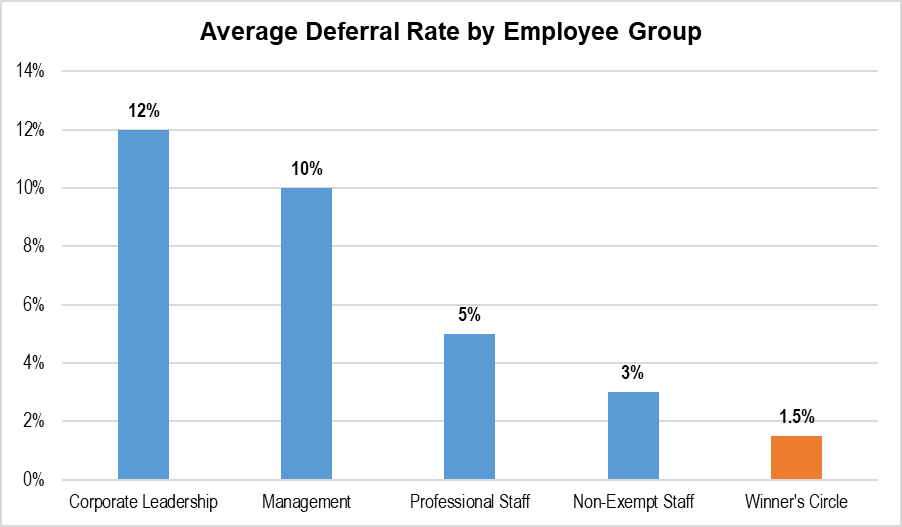 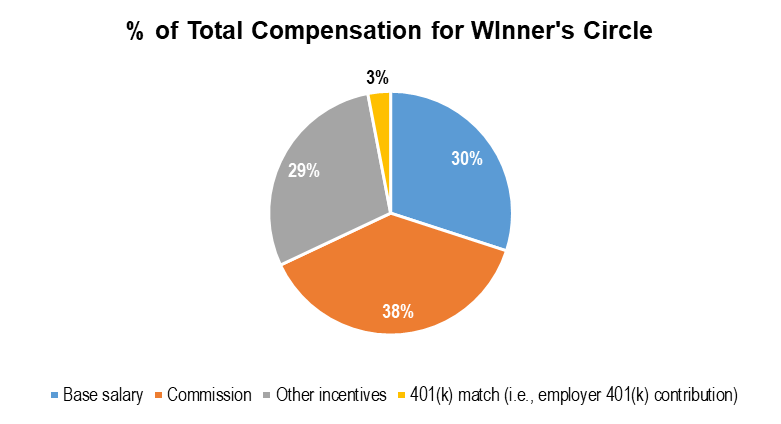 The organization also invited a representative sample of the sales force to participate in focus groups to help the organization better understand these employees’ perspective of the total compensation package. Through these conversations, it became clear that the sales force placed the greatest value on cash compensation and did not fully understand how to make the most of their 401(k) contributions.

Through quantitative analysis of the tally sheets as well as findings from the focus group, Sibson helped the client identify concerns and factors that contributed to the sales force’s low 401(k) contribution rate. As a result, the CEO decided to invite a financial planner (who was familiar with the company’s programs) to discuss financial management with the Winner’s Circle, including the benefits of the 401(k). Individual financial advisory sessions using the tally sheet were also provided. The session was well received and helped increase the deferral rates within the group.

An additional analysis using the tally sheets in the year following implementation showed an increase in the average deferral rate among the Winner’s Circle. With help from Sibson, the client was able to identify factors that contributed to a low 401(k) contribution rate and implement a low-cost, yet well-received solution to increase contribution rates and further differentiate the total compensation package for its most strategic roles.