Employees within an organization are working past what most employers think of as a normal retirement age.  This situation is not allowing sufficient turnover for the organization to provide needed career advancement.

The organization provides three different retirement plan offerings based on hire dates. The oldest plan is a reasonably generous defined benefit (DB) pension plan. The company also offers a less generous DB Plan, and new hires only participate in a defined contribution plan. The 401(k) feature of the DC plan is open to all employees, and employees in all three groups are eligible for an employer match. 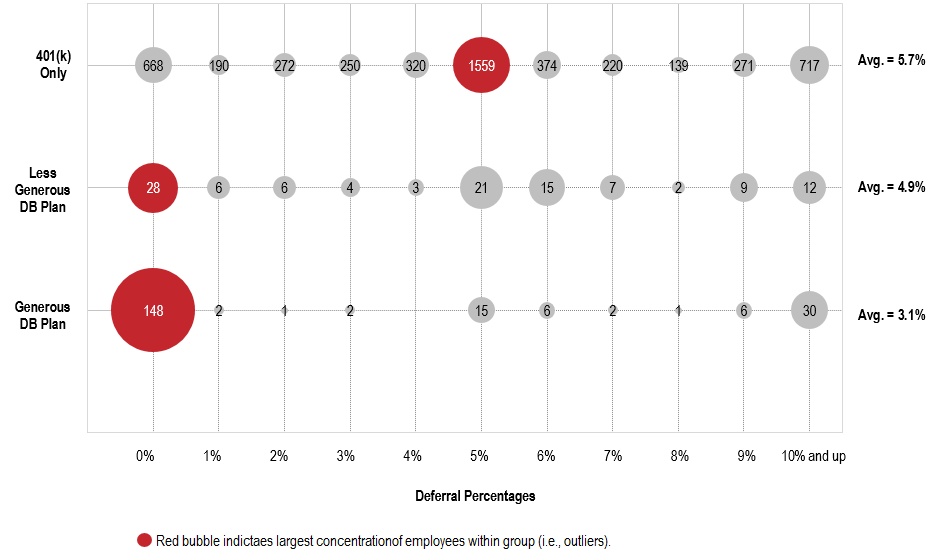 Sibson found that all three groups on average contributed less to their DC plans than they needed and many were not even maximizing their employer match. The non-contributory group with the less generous DB plan stood out because that group was closer to retirement age but had insufficient savings to retire. The DC-only group also presented a similar challenge, although those group members generally had more time to make up the retirement savings shortfall.

Sibson used this information to suggest several ways to improve participation. An auto-re-enrollment program is now in place for all employees. In addition, effective communications are targeted toward groups at risk of not being able to retire at a normal retirement age.

Sibson’s approach has seen a large increase in the deferral 401(k) percentage in the groups that also have DB plans.  It is too early to determine the long-term results of the changes, but it appears to be headed in the right direction.